Tetrahydrobiopterin (BH4, sometimes THB) is a vital cofactor for numerous enzymes in the body, including those involved in the formation of nitric oxide (NO), and the key neurotransmitters dopamine, serotonin and epinephrine. 1 BH4 plays a critical role in both heart and cognitive health. With this important role, many people take supplements that support BH4 levels, and it is frequently discussed together with the one carbon or folate cycle. Before we get into the health impacts of BH4 deficiency and supplementation, and its interactions with the one carbon (folate) cycle, let’s look in more detail how BH4 is formed and how it acts.

BH4 is formed from the abundant, simple molecule GTP in a three-step process, each step catalyzed by a different enzyme; GTP cyclohydrolase I (encoded for by the gene GCH1), pyruvoyltetrahydropterin synthase (PTS) and sepiapterin reductase (SPR).2 Pathological mutations in any of these genes can lead to BH4 deficiency, it is not yet clear if there are polymorphisms that result in milder reductions in function. BH4 as a co-factor

As mentioned above, BH4 is an important cofactor for several enzymes including nitric oxide synthase (NOS)1-3 which are responsible for converting arginine into nitric oxide (“NO”). NO is vital in regulating blood pressure in the body. 3

BH4 is also the cofactor for tryptophan hydroxylase (TPH), which converts tryptophan into the neurotransmitter serotonin. You’ve very likely heard of serotonin, it plays an important role in regulating muscle movement and mood.4

Additionally, BH4 is the cofactor used by phenylalanine hydroxylase in the conversion of phenylalanine into tyrosine, and its subsequent conversion by tyrosine hydroxylase (TH) into DOPA, the dopamine precursor.5 Dopamine is an important neurotransmitter in its own right, but it can also be converted into norepinephrine and epinephrine, the enzymes which control these reactions both use BH4 as a cofactor.6

When used as a cofactor in these reactions, BH4 is reduced into a molecule called BH2, or dihydrobiopterin.7

BH2 is converted back to BH4

To avoid production of superoxide, BH2 in the body is rapidly converted back into BH4 through the action of the enzyme dihydropteridine reductase (QPDR).9 Another enzyme, dihydrofolate reductase (DHFR), which plays a role in the one carbon (folate) cycle, has also demonstrated the ability to convert BH2 to BH4 and I discuss the interaction between QPDR and DHFR below.10 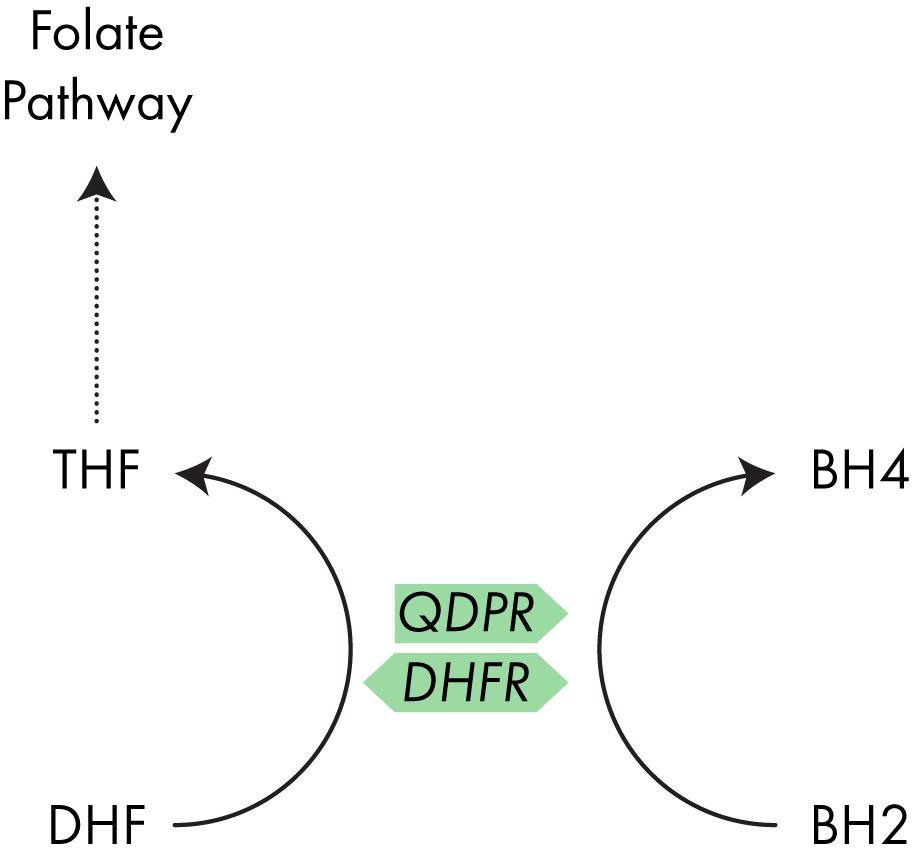 QDPR is the enzyme which typically converts BH2 back into BH4, however the enzyme DHFR has also shown a similar activity.

Often diagnosed by high levels of phenylalanine (an amino acid which is processed by enzymes using BH4 into tyrosine and eventually dopamine) in the blood, BH4 deficiency is recognized as a severe metabolic disorder which is typically detected early in life due to the occurrence of serious health issues.11 This accumulation leads to impaired intellectual development and loss of muscle control. Furthermore, the lack of BH4 impairs neurotransmitter formation and the production of NO by NOS, which can lead to neurological and cardiovascular issues which John has discussed previously. 12

BH4 and the One Carbon (Folate) Cycle

Right now I bet you’re asking ‘how does this link in with the folate cycle? Well, the answer is quite straightforward, but understanding its relevance to you is a bit more tricky. QDPR is the enzyme which is typically responsible for the recovery of BH4 from its reduced form BH2.13 However, studies have also shown that the enzyme DHFR is also able perform this recovery activity. DHFR, like MTHFR, is an enzyme in the one carbon pathway, hence the similarity in their names. However, their action is rather different.14

DHFR sits at the beginning of the folate cycle, MTHFR at the end

Whereas MTHFR is responsible for converting 5,10-methylenetetrahydrofolate (MeTHF) to 5-methlytetrahydrofolate (MTHF); DHFR converts DHF into THF.19 THF, a precursor of MeTHF, is often thought as the start point of the one carbon cycle as it is where dietary folate enters the system, and so DHFR activity is key in maintaining cycle activity. However, dietary folate is not the only source of DHF; MeTHF can be used in a reaction to directly form nucleic acids, the building blocks of DNA, rather than being used by MTHFR. When used to make DNA, MeTHF is converted into DHF, and so DHFR also plays a recovery role. Understanding how everything links together is quite complex so the pathway diagram below, summarizing everything discussed above, should prove useful. Now we know what the ‘normal’ function of DHFR is, lets have a look at its ‘alternative’ activity. As mentioned above, several studies have shown that DHFR can recycle BH4 from BH2. This study by Xu et al 15 investigates its role in detail, trying to understand how QDPR and DHFR interact. Using mice completely lacking the QDPR gene, the authors discovered that DHFR was able to step in and replace its activity. However, there are a couple of caveats that go with the study. Firstly, the affinity of DHFR for BH2 is much lower than for DHF, so the authors propose that the recycling activity of DHFR only kicks in when levels of BH2 are high. Secondly, the authors also state that the affinity of mouse DHFR for BH2 is much higher than that of the human form. So, whilst DHFR may be able to step in to assist BH2 to BH4 processing its importance might be much lower. Finally, the authors show that high levels of BH2 also lead to a reduction in the availability of THF. The logical explanation for this would be that DHF > THF activity is reduced as DHFR is converting BH2 > BH4. However, this doesn’t seem to be the case. The authors were unable to exactly pinpoint how these were linked but hypothesized that excess BH2 may impact on the activity of other enzymes such as MTHFR.

The above data provides a link between the two pathways, but is there any evidence that dietary alteration or nutritional supplementation can have a positive effect? If BH2 levels are high then THF levels appear to be reduced.16 However, BH2 levels only reach these severely high levels in the complete absence of QDPR, which will not apply to any readers here. Supplementation with BH4 may increase the levels of BH2 but there is no evidence that this has a negative health effect, or a positive effect on folate activity. Let’s look at it the other way. Low levels of BH4 are associated with several health issues. Can supplementation with MTHF (the preferred supplementary form) increase BH4 levels? Interestingly, it does seem possible, although the effect is not processed through QDPR or DHFR. Rather, studies have shown that MTHF supplementation can increase BH4 levels by preventing its oxidation into BH2 and by supplementing BH4 activity with NOS enzymes further preventing its degradation.1718 Therefore, MTHF supplementation alone, or in conjunction with BH4, may prove beneficial to those with low levels of BH4.

As always it is important to emphasize that research into these interactions and activities is fairly new. Understanding how various enzymes and pathways interact is a complex study and so whilst beneficial effects may be observed in some, they may not be observed in others. Direct BH4 supplementation is the most obvious target in those who are BH4 deficient, however some forum posters report minor adverse effects. In these cases indirect supplementation with MTHF may prove more beneficial in some cases. Readers of this post may also enjoy:

Oxalates and Kidney Stones: What You Need to Know

Study: A High Omega 6 Diet Can Contribute to Chronic Pain