In a previous post I talked about the genetics of celiac disease, of interest to us here because eating wheat has been shown to increase zonulin levels in the gut in some test tube studies. 1

What is zonulin and how does it play a role in gut health and the state of our microbiome?

If you do health research, you’ve likely come across the term “leaky gut,” or to use the more technical term – increased membrane permeability, which some claim is the cause of some autoimmune conditions.

However, as far as the science goes these associations are currently unsupported, with the quote below from a recent review giving the most concise statement:

Although changes in barrier function have been described in several gastrointestinal disorders, their primacy remains to be defined. At present, few studies support efficacy for an intervention that improves barrier function in altering the natural history of a disease process.

I’ve bolded what I would consider to be the key statement. So whilst the evidence for a “leaky gut” as a driver of certain diseases is weak, there are numerous disorders which can both drive and result from its occurrence.

Structure and function of the gut

Before we go on, let’s have a look at how the lining of the gut functions and how it could become “leaky.”

The inside of your gut is lined with a single layer of epithelial cells which make up the mucosal barrier. These cells are highly specialized having to allow absorption of  all nutrients the body requires, whilst also stopping harmful compounds or invading microorganisms from passing across the mucosal barrier into the blood stream.

To do this, epithelial cells have two major protective features;

Importantly, as well as protective functions, these two features also promote healthy absorption of nutrients from the gut. 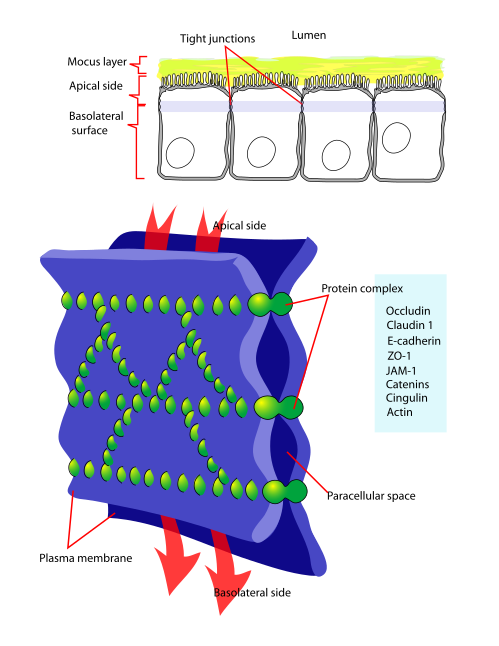 The tight junction proteins create a barrier between the inside of the gut (lumen) and the rest of the body to prevent harmful microorganisms passing into the blood, and also aid in the efficient uptake of nutrients.

So you can see from the diagram above that alterations in the mucus layer, or the formation of the impermeable barrier (going from “tight” to “leaky”) could have large health impacts including limiting proper absorption of nutrients and allowing “foreign invaders” into the bloodstream.

Zonulin was discovered in 2000 by researchers who were investigating the action of Vibrio cholerae (the bacteria which causes cholera) and its secreted zonula occludens toxin (ZOT). 3  ZOT is one of the toxins released by Vibrio cholerae which cause the severe diarrhea experienced by those with cholera, and acts by loosening the tight junctions of the gut. As these weaken, water can rapidly flow back into the gut putting sufferers at severe risk of dehydration.

When studying this toxin, researchers identified that there was a human analogue which our own gut cells could release in order to regulate tight junction structure and function, which they named zonulin. 4 Importantly, zonulin remains the only modulator of intracellular tight junctions expressed so far that can affect gut function and health and associated immune response and so it is widely investigated.

Zonulin in health and disease

So the first question researchers asked is, what diseases are associated with changes in zonulin activity or function?

As I discussed previously celiac disease describes a relatively common, in it affects approximately 1 in 135 people. Complications with diagnosis may mask the true number of celiac sufferers. 5

Celiac disease is a lifelong disorder of the digestive system, triggered by eating even trace amounts of wheat, where the intestine becomes inflamed and is unable to absorb nutrients properly, or process our food correctly. 5

You can see the effects of celiac disease on the lining of the gut below, the delicate villi and micro-villi are lost as the tissue has become inflamed.

If it we look at another microscope picture of the gut from a healthy individual and one with celiac, this time stained for claudin (red) and ZO-1 (green) you can clearly see how the staining is much less intense and covers a far smaller area, suggesting breaks have appeared in the intestinal lining.

Serum zonulin has been shown to be significantly up-regulated in people with celiac disease compared to healthy control7, and also in the cells of the gut themselves when they were assessed after biopsy. 8

Type 1 diabetes (T1D) occurs when immune cells in the body attack and destroy beta cells in the pancreas leading to issues with insulin production and ultimately blood glucose control. Whilst some genetic markers for T1D have been described, the the causes of the remaining cases remains unknown. The above image shows the pathway to the development of T1D.

A common feature of T1D are alterations in to the structure of the gut promoting a loss of tight junctions. These were typically described as symptoms of the disease9 (stage 3 or beyond in the above figure), however more recent studies have shown that loss of tight junctions actually occurs before disease onset (stage 1 or before in the above figure).10

This led scientists to suggest that alterations in gut permeability actually drive the development of T1D.1011 It is important to note here that you still have to be at genetic risk for T1D.

Several studies subsequently indirectly (hence the slightly lower science grade) linked increased zonulin with the onset of T1D following exposure to dietary triggers such as gliadin and glutenin the two main components of gluten from wheat.1213

In both inflammatory bowel disease (IBD) and irritable bowel syndrome (IBS) changes to intestinal permeability have been observed in sufferers.1415 For IBS only a single study has been performed to investigate zonulin levels which reported no association 16, to date no study has been performed in people with IBD assessing zonulin although there are some promising findings based on mouse models.17

Multiple sclerosis is a disease which is characterized by an increase in blood-brain barrier permeability18 with more recent studies showing an increase in gut permeability as well. 19 This same study also demonstrated that zonulin levels were twice as high in MS patients compared to healthy controls.19 However, this work has not been replicated and the chicken or egg questions remains to be answered; i.e. do changes to gut permeability lead to the development of MS, or are these changes an additional symptom of MS? Hence the currently low science grade rating.

Finally onto perhaps the most acute of the disorders discussed sepsis (sometimes called septicemia or blood poisoning). Sepsis is a serious (and thankfully relatively rare, although its incidence is increasing) condition whereby the body’s response to infection damages its own tissues and organs which if untreated can rapidly lead to organ failure and death.20

Numerous studies have reported increases in gut permeability associated with the onset of sepsis,2122 with a follow-up study demonstrating that zonulin was elevated in patients with sepsis.23 However, this study was rather small and the authors suggest that a clinical trial with more patients is required before definite conclusions are made.

Sepsis is of growing importance due to the developing issue of antibiotic resistance. Although an acute disorder if caught in time sepsis could be treated efficiently, however if a fully resistant bacteria was involved then our treatment options are significantly reduced.

There are two main factors that have been identified to increase zonulin expression in the gut.

It is now well established that the bacteria which colonize our gut can have a large impact on our health, both positive and negative. Several studies have shown that certain bacterial species can induce the expression of zonulin. 24 In turn this increased expression of zonulin is able to loosen tight junctions and increase gut permeability.24 What is unclear is if this is a normal physiological response by the body, trying to clear infection by flushing bacteria out of the gut, which may go awry leading to bacteria passing through the gut membrane. Or if it is a process driven by bacteria as a means to invade the body. Understanding this aspect will be key in the development of future therapies relating to zonulin.

The second main factor is gluten or more specifically two of its components gliadin and glutenin, both of which promote the release of zonulin. 24 Interestingly researchers have shown that the cells of the gut only respond to gluten when it is present on their luminal (food side as opposed to body side) side. This allowed them identify a specific cell receptor (CXCR3) for gluten which was then shown to be over expressed in celiac patients. 24

How to check your zonulin levels

There are a couple of ways to check your zonulin levels. The first is the most obvious and easy to perform, a simple blood test to check for levels of protein expression in the blood, as was used in the study investigating zonulin and celiac disease.

A second more complex option is the lactulose or mannitol test which assess the permeability of the gut by measuring the levels of both compounds in urine after they’re ingested. The higher the detected levels the leakier the gut.

There are a couple of issues with these tests however, the main one being that there are no accepted levels that can be considered good or bad, and as we know from this blog there can be a great degree of variability in peoples levels of compounds and their responses as well. So proceed with caution in relation to testing, it may be of use to track your gut function over time but don’t rely on the tests for diagnoses.

So to summarize, zonulin is an important modulator of gut permeability which is strongly associated with several disorders of the gut, with other potential associations as well.

As a relatively new protein (it was only described in 2000) the science is still developing and genetic markers, diagnostic tests and therapeutic targets are still lacking. However, with improvements in testing this is clearly going to become an important biomarker for various disorders, we’re just not there yet.

OMAD Diets: Is Eating One Meal a Day Healthy? The AIP Diet 101: Food Lists, Getting Started, and the Latest Research