We know that vitamin C and fiber rich citrus fruits are healthy, but how much efficacy do they really have when it comes to “big” health issues, such as heart disease?

While we’re all familiar with common oranges, lemons and grapefruits there are actually dozens of different varieties, all sitting in the Citrus genus.

Today I’m going to talk about one particular citrus species, the bergamot orange or Citrus bergamia to give it its proper latin name. Citrus bergamot has shown promise as a natural compound that behaves similarly to statins, albeit with a much weaker effect.

Note: before taking citrus bergamot talk to your doctor.

History and cultivation of bergamot

Highly prized for their complex flavorings and aromas, bergamot oranges are mainly grown in the countries surrounding the Ionian sea, with the south coast of Italy being a major growing location.

Historically bergamot oranges were processed into their essential oil which was then used to provide the top-notes in numerous perfumes, dating back to the 18th century. Later, they were used to flavor Earl Grey tea, reportedly first blended by Jacksons of Piccadilly in the 1830s.

While still used for these purposes, medical researchers have begun identifying compounds found only in bergamot oranges with interesting properties that can protect cardiovascular health. 1

Polyphenols are complex natural molecules, found mainly in plants. They perform a wide variety of duties but are often characterized as being highly aromatic (both in the chemical and smell sense). 2

Bergamot oranges are a particularly rich source of polyphenols, even compared to other citrus fruit, hence their common use as a flavorings or aromatics.

But it is not the quantity of polyphenols produced by bergamot oranges that is of interest to researchers, rather it is the production of two molecules brutieridin and melitidin, which are not found in any other citrus species.

Statins are a class of drug that function to reduce the levels of low-density lipoprotein (LDL) cholesterol in the blood, by inhibiting the action of the enzyme HMG-CoA reductase.

We’ve covered LDL-C, TG/HDL ratio and dietary cholesterol in previous posts, which can get you up to speed, but the current medical consensus is that high levels of LDL (especially APOB) are associated with an increased cardiovascular disease risk.

Whilst statins are effective and the first choice for most of us, they are not the only LDL lowering treatment available.

Bergamot juice has long been used in the Calabrian region (the toe of the boot) of Italy as a means to reduce blood lipids. This use led researchers to investigate the bergamot orange at the molecular level, identifying brutieridin and melitidin as the reasons why bergamot is so heart healthy.34

Both brutieridin and melitidin displayed a remarkable similarity to certain statin drugs, which lead researchers to hypothesize that they to may block HMG-CoA reductase activity, leading to a reduction in LDL.

After successful trials in a rat model which showed a significant reduction in serum cholesterol, triglycerides, and LDL levels, coupled with an increase in HDL levels,5 researchers next investigated the effect of brutieridin and melitidin in human patients with high LDL and high triglyceride levels. 6

The results are shown below, but patients who received 500 or 1,000 mg of BPF (bergamot polyphenol fraction, essentially refined bergamot oil) for 30 consecutive days saw a significant reduction in total cholesterol, LDL, triglycerides and blood glucose coupled with a significant increase in HDL levels.

And most importantly without any reported side effects. 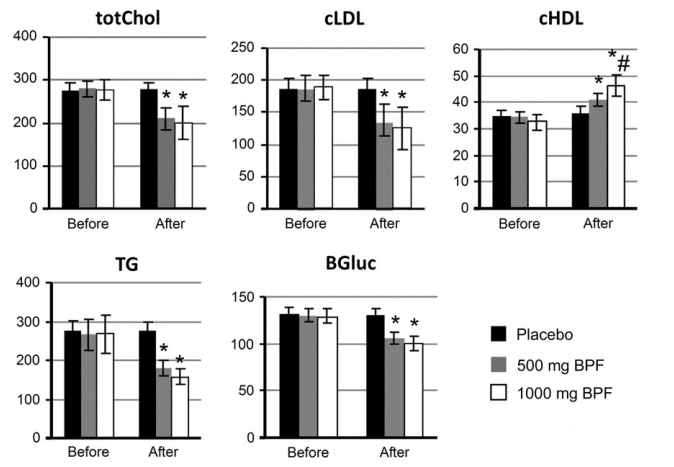 Bergamot orange and the future

These highly promising results led to the authors to make the following statement:

On the basis of our data, BPF oral supplements contribute to lowering plasma cholesterol and lipids in a rat model of dietinduced hyperlipemia and in patients, in a range of potency comparable with low dose statins. Thus BPF offers a safe alternative for patients suffering from statins toxicity.

As you can imagine research into bergamot oranges, and the properties of brutieridin and melitidin in particular, has increased greatly. While there are currently no studies investigating the effect of bergamot oil on blood chemistry in healthy people, to the same extent as the above study, there are some recent reports showing an increase in HDL levels. 7

As you may expect given its statin like effects bergamot oil may demonstrate a beneficial effect for those carrying genetic variants which are associated with poor cardiac outcomes such as the risk ‘C’ allele in ADIPOQ T16627C, the risk  ‘T’ allele of APOE C526CT and the risk G allele of NOS3 G51-898A.

In all instances, bergamot isn’t acting directly on the gene, but is rather modulating the adverse effects associated with that SNP.

The health benefits derived from eating fibrous fruit are well described now, and likely form a part of your balanced diet. 8 Similarly, the anti-oxidative benefits derived from vitamin C, in which citrus fruits are particularly rich, are also well known. 9 But bergamot oranges have one additional healthy trick up their sleeve.

In a study from 2007, researchers found that bergamot orange peel, which is often left over after the oil extraction process displays dramatic antimicrobial activity. 10

In the study researchers demonstrated that following preparation of the peel, the extract was highly effective at killing common bacterial such as Escherichia coli and Salmonella enterica which are commonly associated with food poisoning, and are often a marker of poor gut health.

No further work using bergamot peel has been performed, but subsequent research using just bergamot juice, rather than the oil or peel, showed a positive effect against the Helicobacter pylori bacteria,11 commonly associated with stomach ulcers,12 inflammation13 and in severe cases stomach cancer.

H. pylori is usually treated with high strength antibiotics, but can rapidly become resistant, flaring up again once the antibiotic course is stopped. In the same study the researchers showed that bergamot juice effectively worked alongside existing antibiotics, greatly improving their efficiency in clearing the bacteria.14

This is a tricky graph to understand, basically the lines show H. pylori bacterial survival. If they are dropping it means bacteria are being killed off. The line with the black cross (x) at the top is a control sample where H. pylori continues to grow, the three other lines below that with solid dots are common antibiotics alone. You can clearly see they have little effect.

Interestingly bergamot juice alone (the black diamond) performed better than any of the antibiotics alone. But the most startling results are achieved when bergamot juice and the antibiotics are used together (white shapes), and all bacterial populations are killed. The authors repeated the study using other H. pylori strains and saw a similar effect.

As with any supplement, quality sourcing is crucially important. Many of the bergamot supplements on the market today do not use bergamot grown in Italy, the fruit’s natural habitat and original source. It is thought that the combination of mild year-round weather and the rich volcanic soils of the region are major drivers in producing rich polyphenols which give bergamot oranges such a potent effect, and it is not clear if this is maintained when grown in other regions.

Bergamot orange essential oil and extract exhibits properties similar to low dose statins, without the occurrence of any side effects.

It may therefore offer a safe alternative for patients currently suffering from  statin toxicity, although any change in medication should be always discussed with your doctor first.

Similarly, research has shown that bergamot oil, juice or even peel may be of significant benefit as a co-therapy for those with chronic bacterial colonizations of the gut, for example those undergoing high-dose antibiotic therapy, which we’ve covered before when talking about the beneficial effects Saccharomyces boulardii.

For healthy individuals, a positive effect on HDL has been demonstrated, and given the other beneficial health effects associated with bergamot oranges and citrus fruit as a whole, it is definitely worth having a conversation with your physician about this natural compound.